will appear when the situation becomes clearer

So continue to visit the site

Meetings for the remainder of the

on the Home Page of this site.

Talks are suspended until September 2020 at

the earliest and re-opening will depend on advice

This web site will continue to be managed

during the closure when any further information

will be relayed to our members and friends.

'The Development of the DH Mosquito' 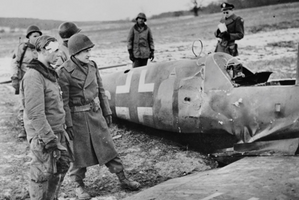 Author, broadcaster and BWAG Patron Group Captain Paul Beaver returned with a review of the German air force from formation in 1933 to final operations at the end of WW2.    Paul’s expert and illustrated presentation emphasised the cumulative effect of fighting campaigns on three fronts, lack of skilled pilots and shortage of both fuel and aero engines and related the story of Herman Goring’s planned and ultimately doomed last throw of the dice in 1945. 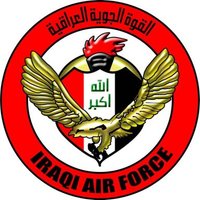 ‘The Rebirth of the Iraqi Air Force.’

Retired RAF navigator John made a welcome return with a modern subject based on his experiences during a four month secondment in 2008 as coalition advisor to the head of the reconstituted Iraqi Air Force. This interesting and illustrated presentation covered structure, equipment and the many people issues encountered during the important and very sensitive post-war period.

Gosport Aviation Society is a group for those with an interest in aviation and related topics. It meets on the fourth Wednesday of each month at the Royal Naval Association Club on Aerodrome Road  - Directions can be found on the GAS web site

For full programme information and the location of the meeting place

Meetings held on the first Wednesday

The Society's full programme may be viewed on the SHHAS website.

Full details of their latest programme

may be found on their web-site : 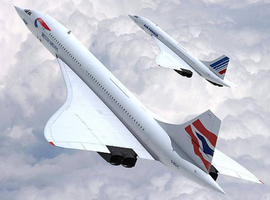 "Experiences of a Concorde Pilot".

Steve graduated from the College of Air Trainng at Hamble in 1972 and flew Tridents and the BAC 1-11 in Europe from Heathrow and HS 748's on the Highlands and Island routes in Scotland.

He then joined Concorde Course No 12 at Filton in 1987. He spent the next six years flying the Concorde to the United States, Canada, Barbados and on numerous special charters including two round-the-world flights.

He then flew the Boeing 757/767, the DC10 from Gatwick and became Base Training Captain on the Boeing 747-400 both for British Airways and later for Oasis Hong Kong Airlines.

He is a member of The Honourable Company of Air Pilots and the de Havilland Moth Club flying the Tiger Moth and has Display Authorisations for the Boeing 747, the DH Dove, DH Rapide, Tiger Moth Display Team and the Antonov An 2.

His talk covered the development of the only SST to enter service, the training involved (including Base Training at Prestwick) and the operational aspects of a typical flight across the Atlantic using photographs and film 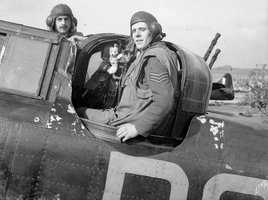 Ted Thorn was a truly local man and this talk described his  flying and heroism during WW2. He joined the RAF in 1928 as a Boy Entrant. Early in 1939 he was accepted for pilot training and after gaining his wings successively took part in the Battles of France, Britain, Dieppe and as a Bomber Support pilot in the night campaign over occupied Europe and Germany between 1943 and 1944.

Ted's combat flying as a Defiant pilot during 1940 achieved, with his Air Gunner, a total of thirteen victories. At the end of the war he served with the Empire Central Flying School between 1945 and 1946 where, sadly, he lost his life evaluating an early mark of the Gloster Meteor jet fighter.

It was appropriate that Ted's daughter Penny Greek and members of her family were present. 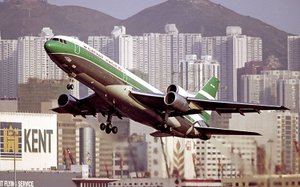 Asian Commercial Aviation Photography in the 80’s and 90’s

Whilst working in Hong Kong and other parts of Asia, David gradually developed his aviation photography hobby until founding his Asian Aviation Photography business (www.AsianAviationPhotography.com ) over 30 years ago in Hong Kong.  His well illustrated and very professional presentation related the story behind his assignments, including a ten year period as an official photographer to Cathay Pacific. His lasting love of the Tristar featured and we had a bonus as the evening culminated with some military images including Tornados in the first Gulf War and the final RAF VC 10  landing in Hong Kong.  Since returning to the UK,  David has concentrated on European locations and airlines. 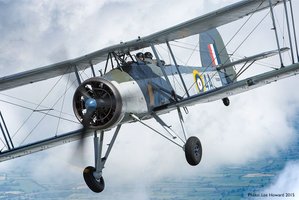 As an experienced Navy Wings pilot Mark entitled the first part of his presentation 'The Mighty Swordfish' and concentrated on the fascinating history and  practical aspects of flying the aircraft.

His well illustrated presentation dealt with the history and future of Navy Wings together with details and status of the iconic aircraft owned and operated by Navy Wings, including the Sea Vixen, Sea Hawk, the two Sea Fury’s and of course the three Swordfish.

‘How the Royal Navy helped to win the Battle of Britain’

Cold War Sea Vixen pilot Kim returned with a timely, very different and well researched subject. Whilst never taking anything away from “The Few”, this talk related that there were many thousands of participants in the Battle of Britain - including the Royal Navy. It also illustrated how superior planning, equipment and 'Lady Luck' ensured victory. 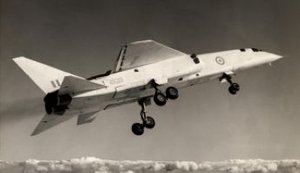 The BAC TSR2 was designed as a supersonic nuclear bomber at the height of the Cold War with a first flight in September 1964.  Cancellation of the aircraft early the following year remains controversial  and continues to arouse strong feelings. Ben is currently completing an Aero Engineering degree course at Southampton University and has researched the aircraft  in depth. TSR2 was considered the most technically advanced aircraft in the world and Ben gave  a balanced analysis of the project with emphasis on how far the engineering challenges contributed to its cancellation. 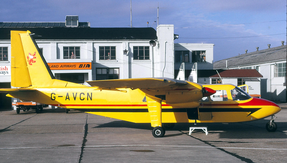 Bob is chairman of the Britten-Norman Aircraft Preservation Society and heads the team of enthusiasts restoring G-AVCN, the third Islander aircraft built and the first production aircraft.

G-AVCN was recovered in a derelict state from Puerto Rico in 2000 and is now, over fifty years after it’s first flight, well on the way to full restoration at the Society’s workshop at Binstead near Ryde.    Bob was well qualified to report on the project bringing us up to date on progress, fund raising and future plans.