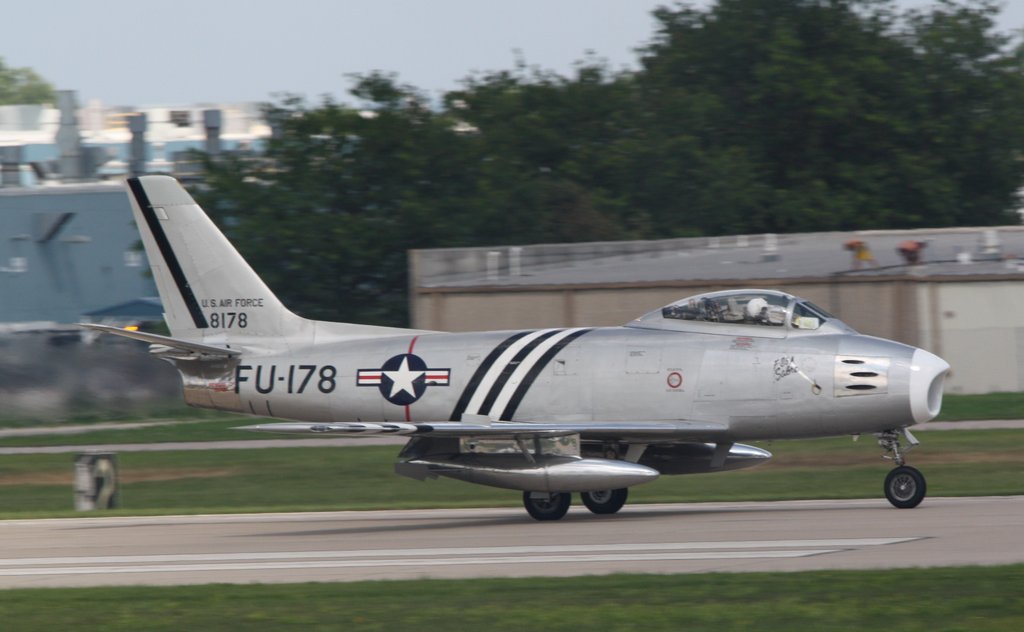 Rod makes a welcome return with this technical talk which covers the initial design and subsequent development of the whole family of the North American Aviation F-86 aircraft including the U S Navy variants and construction in Canada and Australia.

Graham is an aviation historian and tour guide and  chairman of Solent Aviation Society. The 2019 celebrations to mark the 75thanniversary of D-Day included mass re-enactment of the airborne elements of the allied invasion force involving 15 Dakotas from the USA being temporarily based at Duxford. Following attendance at landing zones in France Graham was invited to travel in Dakota N877MG (Pan Am) on the return trip to the USA. The well illustrated story of the eventful flight following the wartime route will include details of the anniversary events and the dedicated international military re-enactors.

Glenn grew up with ‘Folland Aircraft flying through the family home’ - his father Thomas Gilbertson (‘T.G.’) was director & general manager until 1957. The talk will portray Henry Folland, a talented designer at the R.A.F., Nieuport and Gloster Aircraft and a caring man who treated his workforce like a large family. When ill-health meant retirement the very different W.E.W. Petter was the appointed successor; his Gnat fighter project could have led to a bright future or financial disaster. Glenn will reveal some of the unpublished Folland Aircraft story, giving a different perspective to that found in a recent biography of Petter.

Paul Beaver FRAeS sheds new light on a classic air combat encounter from the Korean War in 1952 - where Royal Navy Sea Fury piston-engine fighters shot down a North Korean MiG-15 jet. But was the correct pilot credited for the kill?

David Bruce, author of a number of WWII aviation novels, talks about the Lancaster bomber and its crew. David spent several years researching the Lancaster, its crew, and their operational life, delving into much original archive material, contacting the BBMF, talking to WWII Lancaster aircrew, and being allowed to closely examine exhibits at IWM Duxford and RAF Hendon. Tonight he shares some of his findings...

Steve is manager of the Solent Sky Museum and as an aviation historian has researched both German projects which became airborne and those which luckily for the allies never left the drawing board. His well illustrated talk will show how very advanced many aircraft designs were and the impact of political pressure and limitations of material supplies on the industry in the later years of the war.

Featuring a wonderful collection of images assembled for a book Nigel is producing on the subject, this is an insight into the fabulous X-15 research plane that flew as high as 354,200 feet and at speeds as fast as 4,520mph (Mach 6.7). A total of 199 test flights were undertaken over a ten-year period ending in the late 1960s, in a joint programme involving the US Air Force, NASA, the US Navy and North American Aviation. One of the twelve test pilots who flew this astounding machine was Neil Armstrong.

The X-15 was air-dropped from a ‘mother ship’ Boeing B-52 at 45,000 feet. F-104 Starfighters were used as chase and training aircraft for the X-15 programme. The X-15 followed other trail-blazing aircraft such as the Bell X-1, in which Chuck Yeager became the first person to exceed the speed of sound.

Nigel was acquainted with three of the X-15’s pilots and brings their personal recollections into what promises to be a spellbinding presentation.

Following RAF service and a career in the aircraft industry Stephen is Chairman of the Charles Rolls Heritage Trust and of the New Forest Aviation Group.

In 1983 the speaker was given six months to evaluate two BAe146 jet airliners for their suitability for the Royal Air Force to replace the ageing Andovers of The Queens Flight. The airliner became a popular regional aircraft, especially in the USA, leading to nearly 400 builds. However, there were many bumps along the way and although the type lives on in new roles we find that its successor was abandoned.

Ken’s exceptional military jet experience of over 3000 hours includes the Hunter, Lightning, Jaguar and Tornado together with four years as an RAF Exchange Pilot flying the F104 with the Luftwaffe in Bavaria. Before retiring as Squadron Leader in 1988 his final service postings on the Tornado  were as OC Standards with the Tri-National Training Establishment at Cottesmore and as a member of the Royal Saudi Training Flight.

This will be an interesting and relaxed presentation with Ken preferring plenty of audience participation.

7th September: Rod Dean - ‘The Wooden Wonder - The Development of the DeHavilland Mosquito’

This talk is an in-depth study of the development and use of the outstanding de Havilland Mosquito and all its variants. Rod Dean has been actively involved in aviation for over 50 years as both an RAF fast jet pilot and over 30 years as a display pilot, mainly flying vintage piston and jet engine aircraft.

Author, broadcaster and BWAG Patron Group Captain Paul Beaver returned with a review of the German air force from formation in 1933 to final operations at the end of WW2.    Paul’s expert and illustrated presentation emphasised the cumulative effect of fighting campaigns on three fronts, lack of skilled pilots and shortage of both fuel and aero engines and related the story of Herman Goring’s planned and ultimately doomed last throw of the dice in 1945.

Retired RAF navigator John made a welcome return with a modern subject based on his experiences during a four month secondment in 2008 as coalition advisor to the head of the reconstituted Iraqi Air Force. This interesting and illustrated presentation covered structure, equipment and the many people issues encountered during the important and very sensitive post-war period.

Steve graduated from the College of Air Trainng at Hamble in 1972 and flew Tridents and the BAC 1-11 in Europe from Heathrow and HS 748's on the Highlands and Island routes in Scotland.

He then joined Concorde Course No 12 at Filton in 1987. He spent the next six years flying the Concorde to the United States, Canada, Barbados and on numerous special charters including two round-the-world flights.

He then flew the Boeing 757/767, the DC10 from Gatwick and became Base Training Captain on the Boeing 747-400 both for British Airways and later for Oasis Hong Kong Airlines.

He is a member of The Honourable Company of Air Pilots and the de Havilland Moth Club flying the Tiger Moth and has Display Authorisations for the Boeing 747, the DH Dove, DH Rapide, Tiger Moth Display Team and the Antonov An 2.

His talk covered the development of the only SST to enter service, the training involved (including Base Training at Prestwick) and the operational aspects of a typical flight across the Atlantic using photographs and film.

Ted Thorn was a truly local man and this talk described his  flying and heroism during WW2. He joined the RAF in 1928 as a Boy Entrant. Early in 1939 he was accepted for pilot training and after gaining his wings successively took part in the Battles of France, Britain, Dieppe and as a Bomber Support pilot in the night campaign over occupied Europe and Germany between 1943 and 1944.

Ted's combat flying as a Defiant pilot during 1940 achieved, with his Air Gunner, a total of thirteen victories. At the end of the war he served with the Empire Central Flying School between 1945 and 1946 where, sadly, he lost his life evaluating an early mark of the Gloster Meteor jet fighter.

It was appropriate that Ted's daughter Penny Greek and members of her family were present.

Whilst working in Hong Kong and other parts of Asia, David gradually developed his aviation photography hobby until founding his Asian Aviation Photography business (www.AsianAviationPhotography.com ) over 30 years ago in Hong Kong.  His well illustrated and very professional presentation related the story behind his assignments, including a ten year period as an official photographer to Cathay Pacific. His lasting love of the Tristar featured and we had a bonus as the evening culminated with some military images including Tornados in the first Gulf War and the final RAF VC 10  landing in Hong Kong.  Since returning to the UK,  David has concentrated on European locations and airlines.

As an experienced Navy Wings pilot Mark entitled the first part of his presentation 'The Mighty Swordfish' and concentrated on the fascinating history and  practical aspects of flying the aircraft.

His well illustrated presentation dealt with the history and future of Navy Wings together with details and status of the iconic aircraft owned and operated by Navy Wings, including the Sea Vixen, Sea Hawk, the two Sea Fury’s and of course the three Swordfish.

3rd September: Kim Sharman - ‘How the Royal Navy helped to win the Battle of Britain’

Cold War Sea Vixen pilot Kim returned with a timely, very different and well researched subject. Whilst never taking anything away from “The Few”, this talk related that there were many thousands of participants in the Battle of Britain - including the Royal Navy. It also illustrated how superior planning, equipment and 'Lady Luck' ensured victory.

The BAC TSR2 was designed as a supersonic nuclear bomber at the height of the Cold War with a first flight in September 1964.  Cancellation of the aircraft early the following year remains controversial  and continues to arouse strong feelings. Ben is currently completing an Aero Engineering degree course at Southampton University and has researched the aircraft  in depth. TSR2 was considered the most technically advanced aircraft in the world and Ben gave  a balanced analysis of the project with emphasis on how far the engineering challenges contributed to its cancellation.

Bob is chairman of the Britten-Norman Aircraft Preservation Society and heads the team of enthusiasts restoring G-AVCN, the third Islander aircraft built and the first production aircraft.

G-AVCN was recovered in a derelict state from Puerto Rico in 2000 and is now, over fifty years after it’s first flight, well on the way to full restoration at the Society’s workshop at Binstead near Ryde.    Bob was well qualified to report on the project bringing us up to date on progress, fund raising and future plans.

2nd April: Jack Froelic – ‘Flying the Caribou in Vietnam with the USAF'

Cold War Sea Vixen pilot Kim returns with his enthusiastic and well researched presentation on the daring raid on the Italian base by his Fleet Air Arm predecessors in November 1940. The successful operation by aircrew and Swordfish aircraft from HMS Eagle and HMS Illustrious was to have far reaching consequences for future naval warfare.

This first class presentation covered in detail the story of the Meteor, the UK’s first jet fighter, from first flight in March 1943 to a review of surviving aircraft still flying. Rod has wide personal experience of flying T7, F8 and NF11 variants of the aircraft with the RAF or later as a display pilot. Each development and mark of the Meteor was well illustrated and discussed and supported by Rod’s usual mix of information and entertainment.